Mohiniyattam dance form has developed in Kerala. Performed by women it has graceful, gentle movements. Mohini means an enchantress and a dancer with enchanting movements, dressed in a typical white saree with gold border, hair gathered in a bun on one side and with golden jewellery epitomises the image of a beautiful maiden. Apparently it resembles the Bharatanatyam dance form but is quite distinct in its execution of movements, usage of hand gestures and its stark, simple costume.

Mohiniyattam has enjoyed a revival in recent times and is becoming a popular dance form. It has a format which follows the Bharatanatyam form and the repertoire has common names. In nritta a number called Cholukattu consists of pure dance movements at the end of which is tagged a poem that is in praise of a deity and also narrates the story of the Ramayana in a nutshell. The mnemonic syllables are sung instead of being uttered by the musician. Another item of pure dance is Tillana which follows the musical mode of Bharatanatyam with classical Carnatic music. 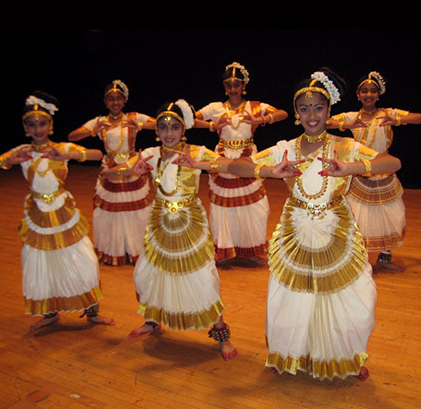 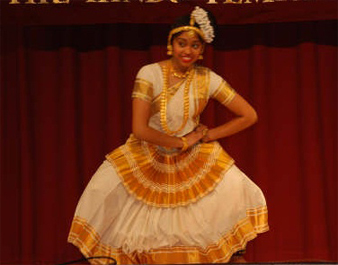 In nritya, the padams are mimed with facial expressions and hand gestures and the themes are drawn from mythology. The nayika or heroine longs for union with her beloved. A confidante goes and conveys the message to the lover and the nayika describes the pangs of separation. A varnam follows the structure of a Bharatanatyam varnam dwelling upon the narration, impersonation and alternating with pure dance. Though the dance units in Mohiniyattam are limited, the quintessential grace and the measured movements are its distinct features.